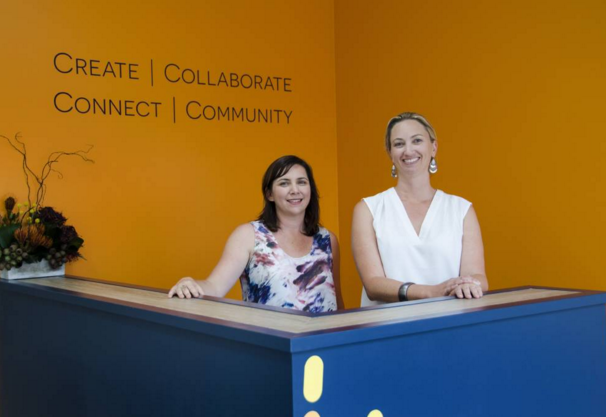 DEMAND for Spark CoWork – the first designated co-work space in Port Stephens – is growing, with the community space adding a business advisor to its offering.

Businesswomen Naomi Farrelly and Beck Morley opened Spark CoWork  in Salamander Bay in December, 2017, after identifying a need for a space to support small businesses, sole traders and freelancers in the area.

The pair, who have worked at length as consultants in the tourism and business sector in Port Stephens, met for a coffee and began each discussing the challenges of working from home.

“I loved the flexibility it allowed me around my family but I became isolated,” said Mrs Farrelly. “I missed that connection and when you are stuck on an idea and you want to bounce ideas around.”

Both keen to separate work from home, the pair researched the co-work idea.

“Destination Port Stephens had looked at it but no-one had taken ownership of it and we just decided it was time and we’d step up and make it happen,” says Mrs Farrelly.

At the Rigby Centre in Salamander Bay, Spark Co-Work has 15 desks and different membership platforms ranging in access and cost. Services including printing, free WIFI and storage.

Prior to opening, the women visited co-work spaces in Newcastle and consulted with Port Stephens business groups to ask what services they believed would be useful. When they secured the office space, it was important that their landlord understood the concept of their business given it was a novelty in the region.

“People thought it was serviced offices or an internet cafe,” says Mrs Farrelly.

“We didn’t go into it because we needed an office space, we wanted to create a community of people, helping all the small businesses and freelancers because we know there are so many working from their garage and if we can bring them together and help them on the journey of building their business then that’s great.”

Mrs Farrelly says there have been many collaborative “wins” for the Spark Cowork colleagues.

“Personally, when I come to work I am here and I’m more productive and I have also found that there’s a greater separation between home and work,” she says.

The business plans to add training to its services, and The Business Centre in Newcastle has a business advisor offering free advice on site every second Thursday.